They all have a story and each one is unique

Bells have been existing for thousands of years. The Bible, the oldest book in the world, already mentioned it. It is present in all civilisations. Of different shapes and materials, the first traces date back to 4000 B.C. The bronze bell first appeared in China around 2000 B.C. The first Christians made it a symbol of call and messianic assembly : the Signum (signal which, in old French, gave the word « sain », synonym with bell).

Our bells are made of bronze (78 % copper and 22 % tin) and are distinguished by their very beautiful presentation. They are decorated with friezes which represent religious or bucolic patterns. We reproduce the specific writings of each community, as well as the effigies of saints and other religious patterns that may be requested and that are part of our collection (about 5,000 engravings). 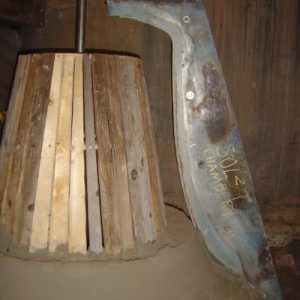 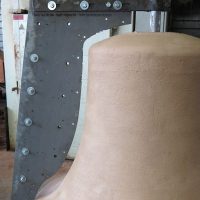 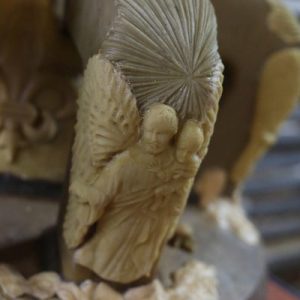 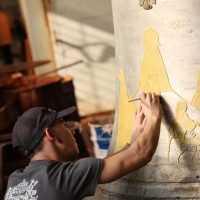 This part of the mould, made of friable earth, represents the bell itself, in whose place it temporarily stands. It therefore has the same dimensions, the same thickness as the future bell. On this false bell is placed the ornementation and the writings. These decorations are made of wax and in relief.

The writings are cast at the same time as the bell. Thus the imprints are placed in the mould, nearly in the beginning of the manufacturing. This is the lost wax process, the writings and decorations are placed on the false bell and engraved in relief, they will then be in negative inside the mould.

For the beauty of the bells, we recommend simple writings. The sobriety is the main quality of the epigraphic style. There are no absolute rules for the composition of the text. The main elements may be : the name of the bell depending on the case, the indication of the reigning Pope, of the bishop of the diocese, the parish priest or the mayor of the town (in particular if this one takes part in the expenditure). In addition, the names of the Godfather and Godmother or the names of the main donors are sometimes added, which can encourage the launch of a subscription.

It is the outside part of the mould, the part that will cover the false bell. It is also made of earth and formed with successive stratums. The first stratums are got with a very light, nearly fluid soil, which is called « polishing powder ». The manufacturing of the cope is then made with thicker clay, reinforced with hemp, which ensure a greater solidity to the whole.

The mould is then fired, which melts the wax decorations placed before and whose imprits remain counter-relief and upside down in the cope. 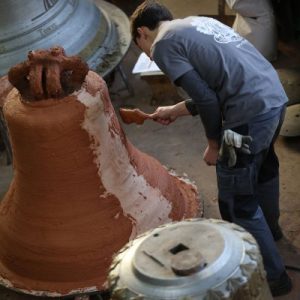 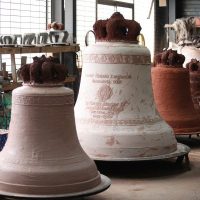 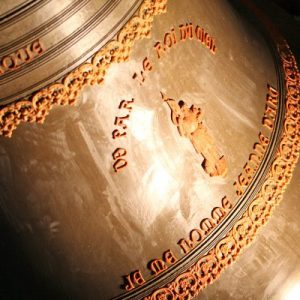 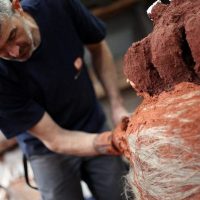 The mould is finished. So, will we execute immediately the casting ? Not yet ! This is where the unmoulding takes place. The false bell, as we said, temporarily replaces the future bronze bell ; it is then only useful for the manufacturing of the cope. The time has come to remove it. Using a hoist the cope is lifted and the false bell is broken. The cope is then placed back on the core. Between these two parts of the mould and thanks to a meticulously established impact, its remains a gap made by the disappearance of the false bell. In this gap is cast the molten metal.

In the past, when the inhabitants of Annecy saw a glow at nightfall towards the North, it was the signal that the next morning there would be a bell casting. The flame sometimes rose several metres above the top of the chimney, throwing off thousands of sparks. There are hardly any of them who have not come, at least once, to attend this operation. It was the time of the wood oven, in Annecy-le-Vieux, where the PACCARD Foundry was located until 1989. Today, in Sevrier, in modernised workshops, gas ovens were used.

A bell casting : moving and unforgettable show ! A really spectacular and almost magical moment, when, on the orders of the founder, the workers give free rein to the molten metal, which comes out bubbling, runs in streams of fire and rushes with whistlings into the moulds which it fills.

It is all really fast, almost like a flash. In a few minutes all is finished, but it is enough, because the air is too hot, the atmosphere has become unbreathable and we hasten to ventilate. During this time, the priest, who has already blessed the metal before its come out of the furnace, give thanks to God for the true thanksgivings, in the silence of all the people.

Attend a bell casting, contact us. With PACCARD Museum, it is possible ! 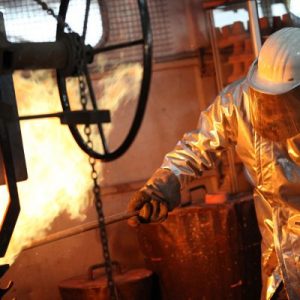 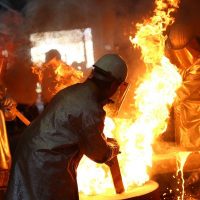